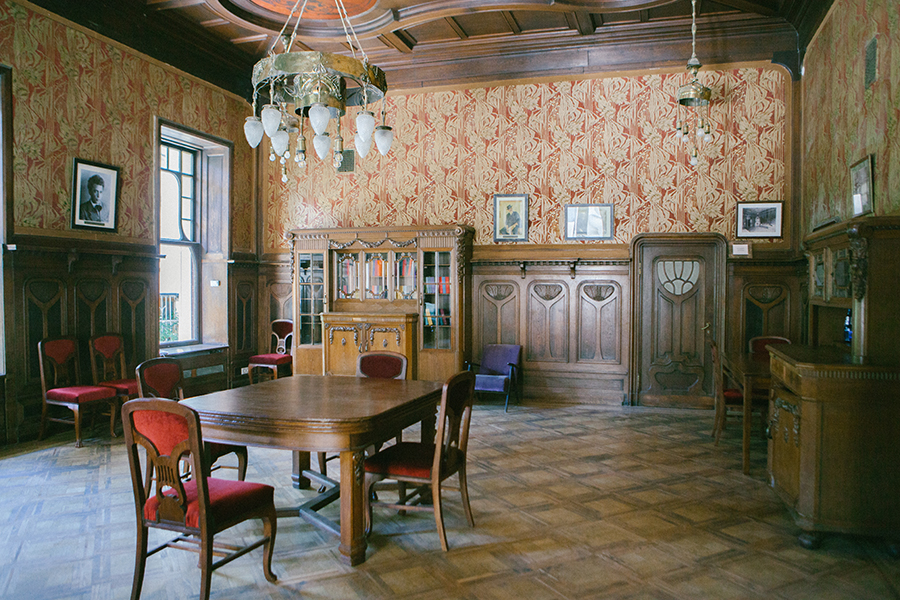 The writer’s House is located in Sololaki, Machabeli street, it is the monument of cultural heritage, built-in 1903-1905 by a famous Georgian entrepreneur, and a big philanthropist –David Sarajishvili. Boris Pasternak, John Steinbeck, Robert Capa, Heinrich Böll, Jean-Paul Sartre, Bob Dylan, Allen Ginsberg-this is just a shortlist of prominent guests who visited the mansion during the Soviet years.

In June 2017 five residential rooms were opened in Writer’sHouse of Georgia. The design of the Residency was created by famous Georgian artist Guga Kotetishvili, specially for Writer’s house. Refined and exclusive decoration of residential suites harmonically fuses with and continues the outstanding design of Art Nouveau building constructed in the beginning of 20 th century. Each room is named after an acclaimed author and is unique to its special and original design. The rooms are named -Alexandre Dumas, Nizami Ganjavi, Boris Pasternak, Marjory and Oliver Wardrop, and John Steinbeck’s rooms.

We choose great french writer Alexandre Dumas’s room. It was decorated to reflect the 18th-century style. In our room we had king size vintage style bed, flower printed chair, old carpets, antique lamps, we had a feeling like we were in a museum. Our room has a view of one of the oldest Machabeli street. The bathroom was a little bit more modern in its styling but comfortable.

Most rooms of the Residency look over one of the oldest streets of the city –Machabeli street, others have a garden view. All rooms at the hotel come with a seating area and a private bathroom. Here you can have a continental breakfast, which is available every morning. The dining area has a view of the beautiful garden.This garden is hosting an exceptional cafe in Tbilisi –‘’ Littera“. Guests of the house will have a chance to taste exclusive meals of Georgian celebrity chef Tekuna Gachechiladze.

As soon as we enter the lobby, we get the smell of history. It’s not a regular hotel, here everything has character. Even the furniture has a story.

A great feature that we truly appreciated about the hotel was that the place has a sense of history. You are traveling in a different era at a place where the best writers were meeting and discussing. As we know one of the first honorary guests of the Residency was the winner of the Nobel Prize for literature Svetlana Alexievich.